«Xin Xiaobai» shot, Barcelona advances to third place undefeated in 7 rounds, not surprising that the value of 9 months has risen by 43 million euros

In the game, Koeman, who likes to change the formation, resumes Barcelona’s traditional 433 formation, but the position of the midfielder has changed a lot. The striker Messi plays the center, Griezmann and Dembele are on the left and right, and the midfielder is in the center Busquets, Frankie De Jong played on the right and De Perry on the left. 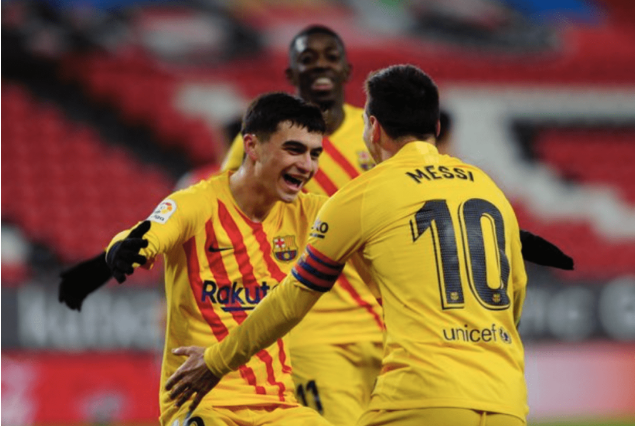 Only 3 minutes into the game, Barcelona was already behind 0:1, which seemed to be a bad sign. At a critical moment, Messi stood up to turn the tide, but the first to tie a goal for Barcelona to stabilize the position is the teenager Pedri. Barcelona’s lead goal was also Pedri assisted, Messi scored. In the second half, Messi scored twice to seal the victory. At the last moment, Messi made a mistake and was pulled back by the opponent, but it was irrelevant.

After winning this game, Barcelona has been unbeaten in nearly 7 rounds. It has scored 31 points in 17 rounds and rose to the third place in La Liga, 5 points behind Real Madrid, 7 points less than the top Atletico Madrid (2 rounds less).

In this hard-won victory, Messi was the first minister, followed by Pedri. As for Dembele, Griezmann, Frankie De Jong, etc. who have been introduced at a high price, they still have little contribution to the team.

← Bundesliga ends the winter break, Leipzig’s new year will make its first fire Heavy! Juventus finds «New Aguero» and completes the contract with only one condition →